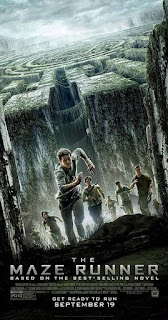 Thomas (Dylan O'Brien), a teenager, arrives in a glade at the center of a giant labyrinth. Like the other youths dumped there before him, he has no memory of his previous life. Thomas quickly becomes part of the group and soon after demonstrates a unique perspective that scores him a promotion to Runner status -- those who patrol the always-changing maze to find an escape route. Together with Teresa (Kaya Scodelario), the only female, Thomas tries to convince his cohorts that he knows a way out.